Make More Money for Producing Lambs at the Right Time

Return on investment in sheep farming as a business is low in line with other farming sectors and is required to be improved to sustain the business viable.  Many sheep farmers in the UK, are not happy with long working hours and large investment with small and tight margins but resist the change to keep their cost of production low.  New Zealand style sheep farming recently has become a fashion in the UK, regardless of being the right approach.   No one disputes cutting cost and prudency in spending is not a good thing but not at the cost of reduced productivity and compromising income. There may be another dimension to this lack of will to change, subsidies paid by the EU, which make up 50% of some of the farms income takes away the incentive to find a way to maximise output. This may be the reason why low input low output system has dominated the sheep industry in the UK, for so long. However, this sense of security may be about to change with Brexit.

In the sheep industry, like any other industry the annual income depends on the difference between the two variables; how many lambs can a farm produce in a year and at what price can he sell them for?  Combination of number of lambs sold and the price received is called output, the most important variable to determine the final profit. The cost at which this output is realised is of course important and is called expenses.  The difference between the two is called gross margin which most farmers are familiar with this terminology.

I believe, you cannot increase your gross margin only by reducing one variable cost as the main drive to higher income comes from higher output at a sensible cost.

What factors determine the output?

Traditionally, sheep in the UK, go to ram in September-October, lambing in March-April/May. Lambs are ready for market July onwards depending on their LW when born. Thus, the outcome is a lambing spread over 2-3 months, with lambs reaching market weight 4-7 months after lambing which coincides with lower value of sale upon reaching the market due to large number of lambs flooding the market. 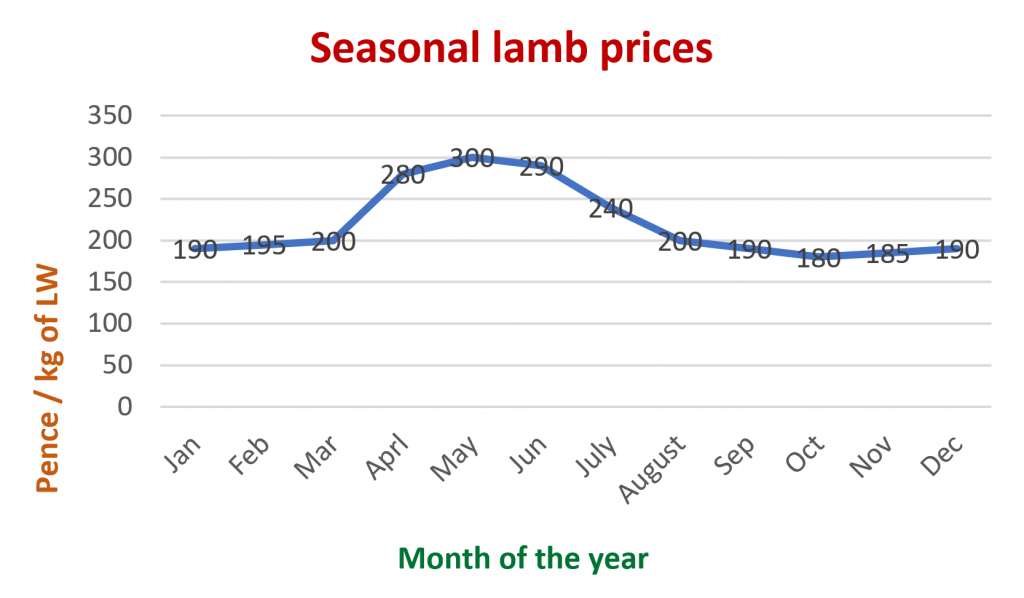 Prolific ewes are more profitable because they produce more lambs generating more income.  In order, to achieve the same performance with ewes of average prolificacy we must increase the frequency of lambing to produce more lambs in four years of the ewe’s productive life.  The number of lambs born and reared is the key to making the difference between high and low performing farms.

To demonstrate the point, we look at a summary of gross margin calculations.

Table below compares gross margins, for three farm performances.  Performance per farm is determined by number of lambs born reared and sold per 100 ewes going to the ram.

Points to note from the above table are; lambs born and sold per ewe being the major factor determining the farm annual income (higher performing farms have higher lambs sold per 100 ewes going to the ram). Variable cost is virtually the same across the board with lamb mortality not hugely different to make a big impact on the gross margin.  The conclusion is to increase the number of lambs born as well as lowering morality rate which is only possible by tighter control of reproductive management. This includes more control at tupping, scanning the ewes for pregnancy at the right time, management of lambing and lactation and finally getting the ewes ready for the next breeding cycle.

Use Synchrony Within the Breeding Season

Complete tupping within 3 weeks, have intensive lambing March/April to maximise the use of good spring grass and also warmer weather for lambing if you are lambing outside.

Synchrony is a process using natural or synthetic progesterone to control breeding cycle of the ewe regardless of season or time of the year.

The treatment takes 6 -12 days, and within 48-72 hours after end of treatment majority of the ewes are covered by the ram or if you wish to AI them. 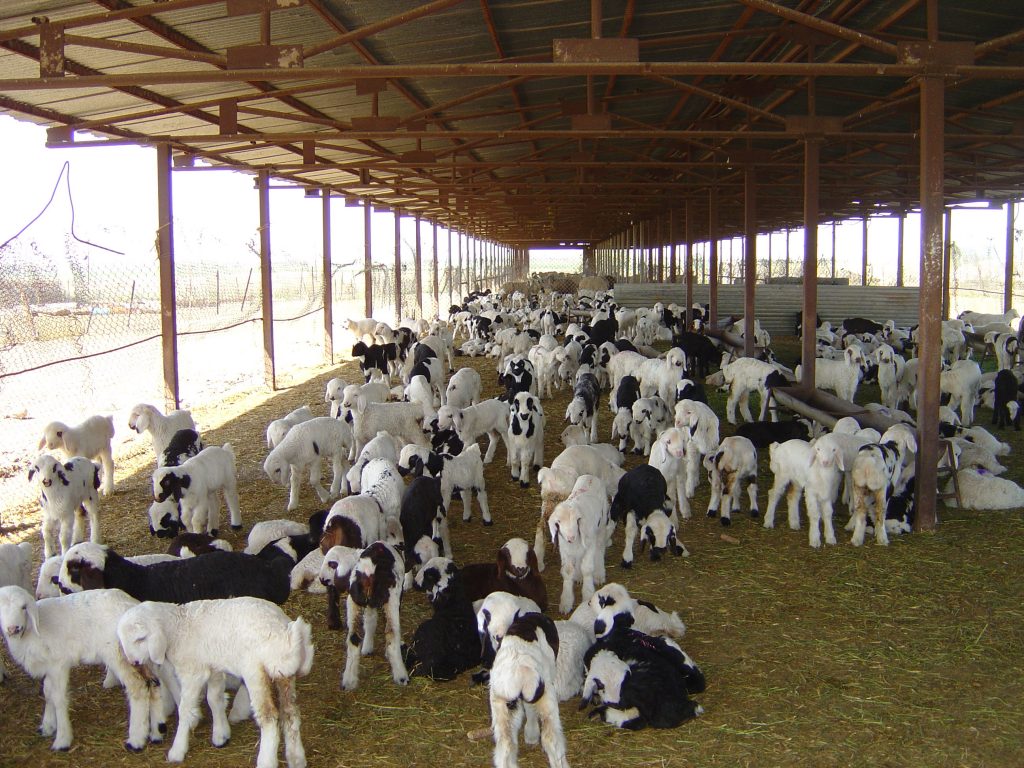 The picture above is captured from a sheep farm of 5000 fat tailed ewe flock in the Middle East. Lambs in the picture were born within two days of each other. We used synchrony on this farm 25 years ago, when the farm was experiencing financial difficulties. The lambing was switched to once a year but marketing lambs to coincide with Ramadan when price of lambs are doubled the normal prices.

Synchrony out of Breeding Season

Winter lambing in December - January, selling lambs with premium prices in April - May although this system is more expensive and requires indoor lambing facilities, still increases output and reduces uncertainty of lower market prices in July and August. I have spoken to a few sheep farmers from low land farms, majority of whom think this idea is a non-starter for commercial sheep farms.

I visit a farm not very far from Oxford, with a flock of 2000 breeding ewes. This farm has for the past 32 years been carrying out synchrony and cervical AI on all their ewes for December lambing. Outstanding performance! Not only by achieving 2.1 lambs sold per ewe per year but getting the highest price for lambs in April and May. Therefore, the idea of intensive lamb production is not a new concept as many would like to believe! I am sure that the farm in question too is aware of other options like producing lambs with low input low output system and other cost saving ideas. The problem I can see for low performers by contracting their business to save cost, is they may become too small to exist!

Table above compares Gross Margin for two systems, March lambing and December lambing. There is a 35% extra margin for out of season breeding due to receiving higher premium prices.

In order to have December lambing you can use Polytunnels which come at reasonable prices, if you don’t have the extra building facilities available.

Synchronise for Lambing Every 8 Months

About 25 years ago, we encouraged large sheep farms in the middle East to opt for lambing every 8 months. The idea initially seemed obscured and took a long time to take off.  However, the main reason the project became successful after the initial resistance was because lots of sheep farms operated as a feed lot system without the use of the pasture, and they had to feed the ewes throughout the year with expensive feed regardless.

Three lambing in two years offers much better margin, although requires higher management, costly operation but you get the maximum return out of the ewe’s productive life by optimising their reproductive efficiency. Cost of synchrony is insignificant compared to the income generated and peace of mind coming from controlled breeding.

For UK farms may be this idea is more controversial and for the time being less practical.

With rough gross margin calculations in the table below, 3 times lambing in 2 years did not offer a significant higher margin(41%)  than advance breeding which is December lambing  at 35% increase compared to normal lambing time, unless the farm facilities are geared with the system to produce more lambs from restricted pastures or feed availability becomes limited due to drought, like what is recently happening in Australia. 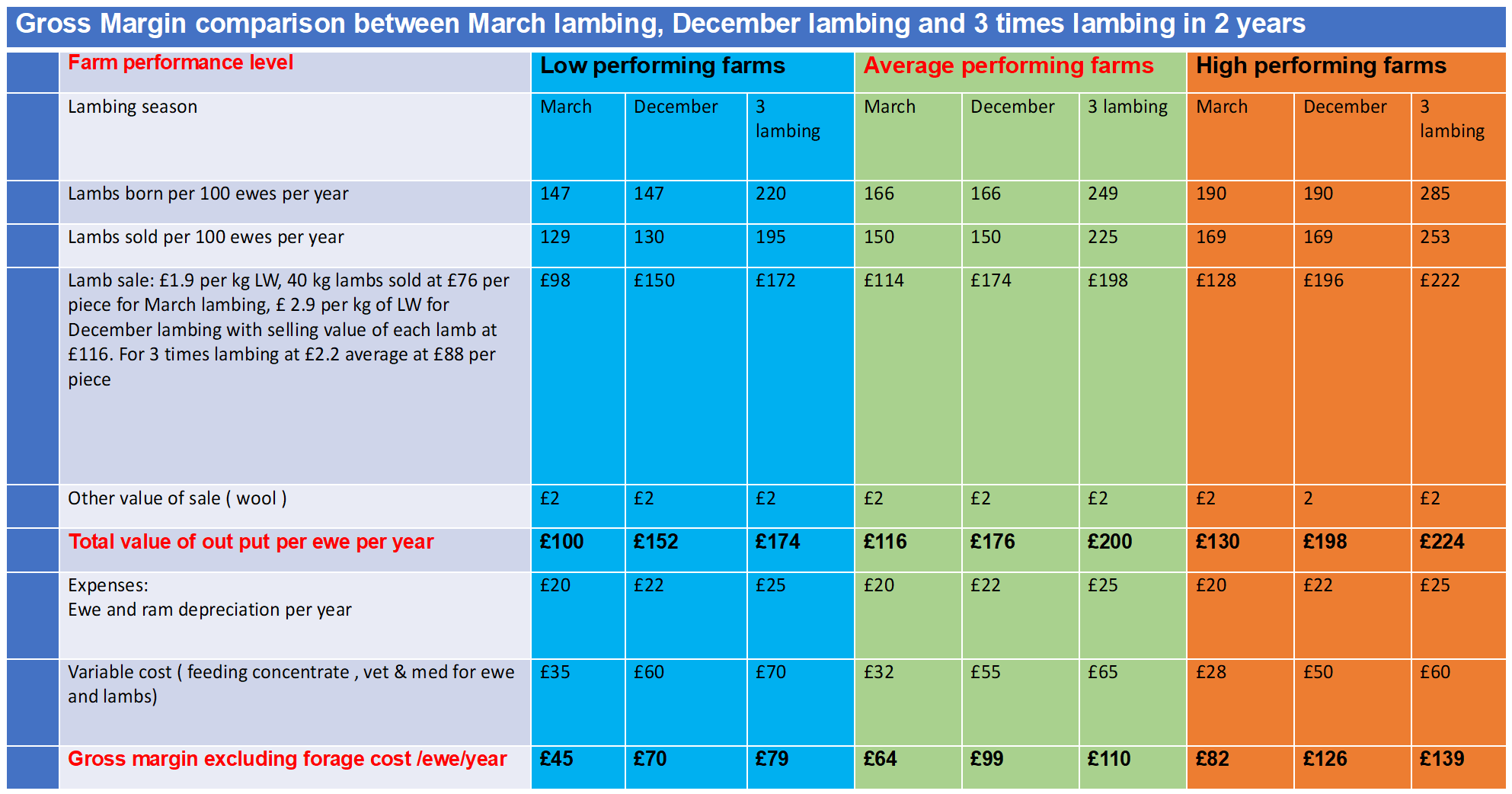 The above table compares Gross Margin with normal lambing time, December lambing and 3 x 2 lambing in two years. These values are projection of gross margin for different systems.  Please note for each category for example average performing farms in the colour  green , colour blue for low performing farms and rusty orange colour for high performing farms . The comparison for all three options are clear.

The above options are all food for thought!  Not all of these options are suitable for all farms. Progressive farms that choose any of the above breeding options can still make maximum use of grass as a major feed with their ongoing management arrangement, the only visible change is in the reproductive performance through control breeding. The only obstacle may be the cost but change seems inevitable and will not be without costs.  The time has come for the British Sheep farmers to take a radical approach of producing lambs under a more intensive system to boost their income if they wish to stay in sheep farming.

Lambing every 8 months is the key to producing more lambs, a future vision for lamb production especially for farms that more rely on supplement feeding.   In the US, Australia and New Zealand, some farmers have started lambing every 8-9 months and undoubtedly it will get to the UK, at a later date.   In the Middle East, we have been running projects of ½ million synchrony per year for the past 25  years and it remains the only option to produce lambs economically.  Without this system sheep production is nothing more than a loss-making industry.